Today was a bugger. Bits of annoying drama at every turn. That being said it could have turned tragic.

M is legally blind. She sees far less than what she would like you to know.
New bus driver.
This morning he parks between us and the neighbours leaving the child with her vision impairment and cerebral palsy to find her way in the dark, through snow banks along the curb.
Fine. New driver.
I escort her down and explain the situation.

After school...driver pulls up across the road from the house and HAS THE BLIND KID CROSS THE ROAD BY HERSELF!!!!

She told me he would give her the thumbs up if it was safe to cross....
HALLLOOOOO!! She can't SEE what the heck if anything you are doing with your thumbs or your whole dang body from outside the bus!!!
S'rsly!  Why don't I drink?!
Posted by Unknown at 4:41 PM 1 comment:

A good news kind of day.

First...'child' has seizure in crowded hospital gift shop and I successfully save her, the fancy breakables and all without anyone knowing what was going on. Thought running through my mind was the zero time for a code 66 being called PLUS all the Christmas stuff was on sale 40% off! All the fuss would likely ruined my scoring of the deals!

Two....'child' was determined to have no tumors in her eyes or on the optic nerves and this was discovered with minimal wrestling and no dilation.

A Christmas miracle kind of day really
Posted by Unknown at 5:20 PM No comments:

My world consists of the sweetest, kindest most generous people!

I am grateful for those of you who think of us and reach out with kindness.

You're all just swell!

I love each and every one of your pointed little heads!
Posted by Unknown at 5:48 PM No comments:

Another year and once again no invitation to Ellen's Twelve days of Christmas.

No she doesn't know me and no I have not tried to get tickets but that is totally not the point....
Posted by Unknown at 4:20 PM No comments:

Happy Thanksgiving to all you Americans who have stopped by the blog to see that I am painfully behind in updates.

Just know that as you spend the day hopefully surrounded by loved ones, over stuffing your bellies with delectable delights, basking in the gratitude for all you have that I am too!  (well the feeling grateful part.  Tonight's dinner is Costco lasagna....).

These darlings of mine and those not in the picture leave me grateful on a daily basis.  Sure there are days when I think the next dirty diaper, or tossed plate of food during a seizure might be the last I can endure but thankfully those days are few and far between.

We live in a country that is free.  We have what we need and an abundance more.  We have love and share love.  When people look at us they might not think we epitomize what it means to be fortunate. Make no mistake however.  We are. 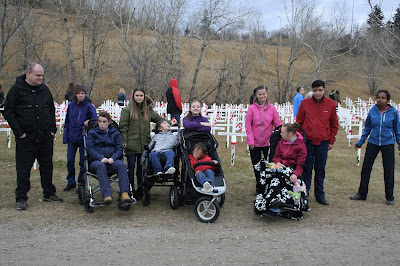 Posted by Unknown at 2:03 PM No comments:

my deep freeze has quit. How many perogies per baggie would you say would be appropriate to hand out to the trick or treaters? Im thinking maybe for the costumes that showed a lot of effort I would throw some steaks in. Most creative a roast beef?
Posted by Unknown at 7:24 PM 1 comment: