Attention all trick or treaters. Against my better judgement I have purchased the Halloween candy today. It is my advice that you don your costumes and be at my house before weeks end. My own children will not have access to the treats as I am a good hider however not so good that I can hide them from myself. That skill is left for early bought Christmas presents. Heed my advice or face disappointment on your big night.
Posted by holland was my destination at 4:24 PM No comments:


1)when installing a love of omlets in ones family it is best to first remember how many children one has
2)when completing an emergent, necessary room renovation that causes enough disruption in and of itself, deciding to redo all the carpeting on the main floor will cause infinitely more
3)it is impossible to put a house back together with all of its occupants who demand your time and attention in attendance
4)no matter the disruption, no matter the distractions I am grateful each and every day for the resources we have, physical, social, emotional and financial to do what needs doing and I will never begrudge any time or attention this hard fought for family requires of me
Posted by holland was my destination at 7:39 AM No comments:

We are undergoing some unexpected renovations.  This has involved the shuffling of kids into different bedrooms and having one in mine.  As the job was coming to an end today more drama was discovered which will lead to more renovations.
The kids are handling the disruption well.  Surprisingly a few of them noticed the new carpet and enjoyed sitting on it running their hands through its lovely new texture.  I made sure to remember to ask for the super dooper waterproof underlay....  The carpet guy when beginning to roll back the carpet to remove it said "umm I think I might need gloves".  A wise assumption I guess when you see brown stains covering the old underlay.  As good as a thought that was seeing as he had met the children and was letting his imagination run wild with what the stains were I was able to assure him it was indeed chocolate milk and pepsi.  I wonder if I sued the sippycup manufactures I could get my iMac replacement costs back and maybe some of the carpet costs too.  To be sure there is no more carrying around sippycups of chocolate milk.
Posted by holland was my destination at 8:01 PM No comments:

It's been busy around here.  And stressful.  STRESSUL.  All is well though.

Hopefully will get to posting some pictures shortly.
Posted by holland was my destination at 11:22 AM No comments:

She would have been eighteen.  She might have been starting her first days of grade twelve or even beginning the first of four years of university.

The world should have been hers to conquer.

Instead she died the day she was born.  She didn't die because of any inborn error or birth trauma.  She died because her mother chose to leave her in a carport at strangers house on a cold rainy day instead of what would be sure to be a safe place.  The carport was not a safe place as unbeknownst to this mother the family did not characteristically use that door.  Baby was found after she passed.

I'm sure their are many many reasons why this mother did what she did but they are ones that she will likely take to her grave.  I wonder about her a lot.  Is she still living?  Is she productive?  Is she educated?  Did she go on to have more children?  Then I wonder what would happen to her if her identity was found.  We can assume there would be a list of charges against her the biggest being the child's death.  Depending on the life she is living now would it serve anyone to incarcerate her removing her from might be a life of contribution?  What if she is someone not living up to her potential perhaps acting as a detriment to society?  Would we be more likely to incarcerate her then?

What remains in the end is that this little person was cheated out of any kind of life.  She however was not born in vain and without leaving a dramatic mark on society.   She forever lives on in my heart.  I think of her as Mary Catherine, the name I tried to give her in my attempt to assume legal guardianship of her remains eighteen years ago.  Unfortunately you cannot adopt or take legal guardianship of a person who did not exist.....  No live birth record.....she did not exist.

Mary Catherine left this world to forever to be labelled....Baby Jane Doe.

She has a legacy though, my teeny little Mary Catherine.  She taught me what to do when other babies follow her.  Because of her I know who to contact to get ensure that there is a public funeral, a proper burial and a marked grave in a specific part of the cemetery.  I have had to put these skills to work a few more times but as many times in these situations family is eventually found leaving my services unnecessary as the baby then has family.  Baby John Doe sleeps in a cemetery north of us in the province....or Michael as I have named him.  His story a little more tragic as he was put in a dumpster.

It is my belief when these babies are abandoned like this they belong to the village.  WE are the village and it is up to us to claim them, provide for them, mourn for them and remember them.

Share some of your heavenly birthday with Ailish and Michael too.  Kisses to all of you 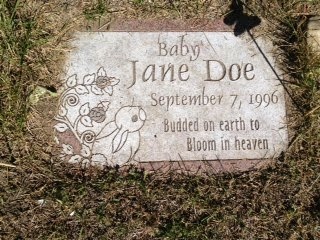 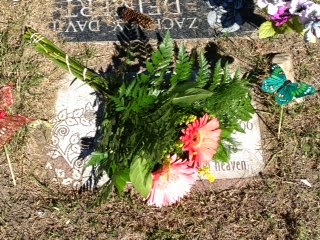 Posted by holland was my destination at 9:02 AM 1 comment:

As follow up to my last post I just saw on the news that lack of sleep eventually causes brain shrinkage.

This is my new excuse for everything
Posted by holland was my destination at 6:20 PM No comments:

Man alive I wish I could grasp onto some degree of organization.  I know I know, everyone thinks that because I have thirteen kids that I must be so so organized.  Nothing could be further from the truth.  Take today for example.  I pulled one of the teens out of school to go for her postop check at the children's hospital.  You know when you get there and the receptionist gives you a combined look of confusion and fear that this is not going to bode well for a successful appointment.  Her confusion comes from the doctor not having any more patients that day so why would we be standing before her saying we have an appointment.  Her fear comes from waiting to see who's fault it might be and if it was the clinic was I then going to have a meltdown right before her eyes.  Being I know myself all too well I inquired as to whether the appointment might indeed be tomorrow at the same time.  Not shocking to me it is.  In trying to rectify the situation and knowing we could be a quick check I inquired as to whether the doctor would be able to still see her because I know clinics like to mess with their timing to accommodate dopes like myself.  Turns out he was all ready behind so we will repeat the events of this morning tomorrow.

If that was not enough I return home to a message that I had missed an appointment for one of the others.  Yay me!  I love to make my incompetence plainly obvious.

Tomorrow's a new day where I can hopefully document on the calendar, read the calendar and once again create the facade that I indeed have it all together.
Posted by holland was my destination at 4:01 PM No comments:

I have had an epiphany regarding a new business venture. I am going to start making ALCOHOLAGRAMS. I figure business will be especially good in September, December and June with teachers, school administrators and support staff my main demographic. Parents will send them as teacher appreciation gifts for the holidays and year end or just in gratitude for dealing with really tough behaviours some of the students exhibit. Teachers might choose to send them to each other as little pats on the back when they see a peer in need of encouragement. Administrators could send them as a reward for a job well done and as an incentive to continue going that extra mile. I think it is likely I might have that summer home I have always dreamed of....
Posted by holland was my destination at 5:34 PM 2 comments:

If you were a white cane put away at the end of June.....where would you be the night before the first day of school?

Posted by holland was my destination at 7:23 PM No comments: