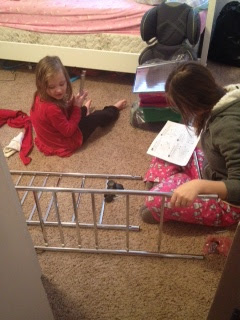 In building a shelving unit together the adorable six year old instead builds letters with the pieces she is 'helping' hold.

"You tell me an 'f' word" says the stupid mother accidentally setting herself up for a bomb.

And the mother breathes a sigh of relief that innocence reigns supreme in the little one at least for that moment in time.

The mother then gives pause as to why fox was not the first 'f word' that came to her mind....

Posted by holland was my destination at 11:12 AM