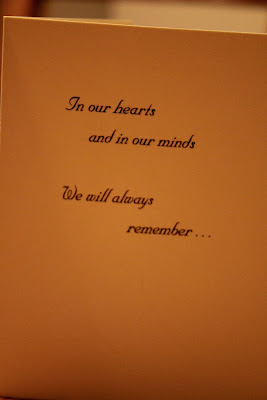 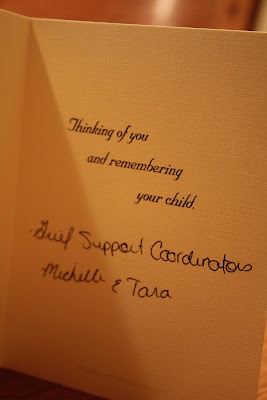 This was sent from the Bereavement Team at our local children's hospital.  It was unexpected but not unwelcome.  Though it is a reminder that Ailish is gone it means that for a short time a year later she was on someone's radar other than mine. 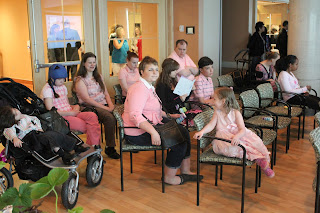 Though I am not involved with any of it I think the hospital has a really good support program for families  who have lost children.  I never expected that.  I thought that once Ailish passed that our association with the hospital relating to her would be done.  This has not been the case and should I have wanted to avail myself I think they offer not too bad a service.  Two things we have participated in is the memorial service for all the children that have passed away in the last year and the memorial Christmas tree decorating.  These were necessary for us as a family and of course two more occasions that others would hear about a really great kid. 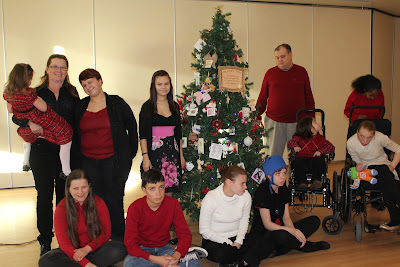 There has not been a time since Ailish passed that I wanted to join a grief group or seek out grief counselling.  I have been lucky that I have many friends that unfortunately have been down this road before me so I have had natural supports.  I also figured out that no matter how many people you talk to and no matter how enlightened they are on the subject grief in the end is a walk that is done alone.  I believe this to be the case even in a marriage when a child is lost.  Everyone goes at their own pace and you might have a partner and you might have sage advice all around you but nobody can do the work for you.  No one can take the gut wrenching emotions and feel them for you.  There is no getting away from the fact that it is a lonely process.

What I have experienced is a forming of new relationships and strengthening of old ones.  Losing your child or journeying through any period of bereavement has you show a vulnerability to people who may not have been witness to that in you previously.  It leaves you on the receiving end of others' charitable acts and deeper level of friendship.  There are changes that occur in all your relationships when you lose someone.  It sounds odd but it can all be difficult to bear when you are dealing with the biggest change of all.  When your loved one passes you want time to stop.  You want everything to remain as it was the second before they left.  It is an assault to the bereavers' sensibilities that time has not stopped.. except for them.  The world is revolving, people have their own families, jobs and activities to attend.  They still get their hair cut, plan birthday parties, go to the movies etc ad nauseum.  But everything has changed.  For you.  Nothing will remain as it was and the job then becomes finding the new normal.

Another thing I have learned about grief is that it is unpredictable and as I like to refer to it...stupid.  It's like it has a grip...a death grip if you will on your heart.  You have days or periods in the day where you think you might actually survive and then whammo you are hit with a physical reminder of your loss or a memory pops into your consciousness and you are thrown to the ground once again.  As time goes on you have more days that fall on the good side and you think to yourself that you are getting a handle on things and then comes a swift kick to the gut.  There are days when you can predict that your emotions might rise to the surface more...holidays, anniversary dates etc but it's the days that seemingly have no known significance that are surprising.  Totally unfair.

Grief colours everything for me.  When I'm feeling tired, just because I am the impact of my loss feels so much more.  If I'm feeling a bit under the weather I can ride the cusp of depression because now not only am I sad but now suffering the effects of a virus etc.  Grief just makes everything bigger for me and not in a good way.

A year has passed since Ailish died and we have had all our firsts and as of Easter our first second without her.  I recently took down her crib which was huge for me.  I was hoping as we carried on into this second year that the enormity of my emotions would be less.  I think they are.  Waves of nausea still pass over me when I am hit by a particular memory of Ailish or my eye catches her pictures in a way that touches my heart especially that day but I think overall things are improving.  Perhaps some of it has to do in trying to not think about Ailish being gone as much which is difficult as she permeates every aspect of my day but it is almost a necessity as the depth of my feelings for her is so great I could wallow to a point of becoming unable to function.  That would not serve me, Ailish's siblings or her memory.

Ailish has been a leader in many ways to our family and obviously a strong teacher.  All the lessons she has lead us to and taught have immeasurable benefits though obviously some I would love to have learned  another way. Perhaps one of her most valuable lessons Ailish left us with is that the road to hell and back is paved (a great phrase Lorna!), meaning I would sign on again in a heart beat to welcome someone else just like her into the family again.  Even knowing that a life might be short helping to ensure it is a life well lived is a great privilege.  It is one hundred percent worth the heart ache and a sentiment actually that her teen sisters share.  Ailish's impact was enormous and the lesson plan she brought with her continues to be implemented daily.

I will repeat myself however when I say, grief is still stupid.


Posted by holland was my destination at 9:38 PM

I couldn't have said it better myself! Beautifully and honestly written, and yes, I agree...grief is kind of stupid :0)